My son hates school. He hates the idea of going away from Mom everyday. He hates the coloring and other boring stuff. He wants to have fun!

When he turned 5 this past July, I knew I didn’t want him to start Kindergarten until he was 6. But I also knew I had to enforce school more. I had to buckle down and make him do it and learn. And then I had a melt down and wanted to (probably did) cry.

Finally, I have found a plan that works for us!

I signed up for a million homeschooling blogs and newsletter that I barely have time to read. One was from LivingMontessoriNow. About the time, I was ready to send him to a half day preschool, I opened one of their emails. It was a listing of different events or holidays for the month of October. As I was glancing through it, I saw how I could fix our preschool. I was too focused on the letter of the week, number of the day and blah blah. I sucked all the fun out of it.

I used these days as my theme for the day. Then, I tied in crafts, letters and sounds, counting and anything else I could, in with the theme. The days have a much more relaxed feel to it. He is asking if it is time for school. He loves the themes and is absorbing what I am teaching. He can even retell it to his Daddy during dinnertime. Without any prompt, he is telling Daddy or Sissy Alissa what he did or learned. I am trying to make everything visual and hands on. By doing this, I am seeing a difference. By letting him ask questions and answering or explaining things to him, he has become a little sponge!

Not only is my Lil Man loving and learning in school now, but it is cheap to almost free most of the time. I use Pinterest and blogs that provide free worksheets to create my “curriculum.” I use the library to find our books for our themes or movies. I also use Netflix from time to time.

So what has my son learned in the last month and a half.

One night at dinner, he was telling my hubby and I about how when it’s dark here, it is daytime somewhere else. I don’t even know where he learned that.

I know he learned so much more because he sat in on lessons with his sisters and helped on projects. And my lil guy is always asking questions and wanting something explained.

We have also been taking a lot of field trips! My son is very into maps right now and learning about Geography, where our state is and where other states and countries are. So a field trip to the Food Festival at Epcot was the perfect spot for growing that learning.

And to play some drums! 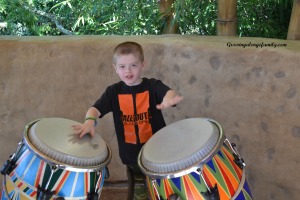 To wrap up the month, of course we had to have some fall fun with a lesson about how pumpkins grow and the life cycle. What letters and sounds do pumpkin and jack o’lantern start with and wrapping it up with a trip to the pumpkin patch. 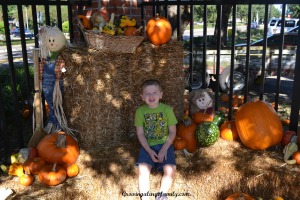 And the best part was how Dakota kept saying how much fun he was having. Score for Momma!