I have 2 Cayuga Ducks on my homestead right now. I love these ducks. I have 1 male and 1 female. I named them Hook and Dark Swan in honor of the show, Once upon a time.

Hook is such a sweetheart. He is one of the ducklings we hatched.

He likes to chase after our feet and nibble at our boots. He is also very spoiled by his Mama. He always waits for his food because he knows I let him eat out of the food container. He is also very curious of everything, like my camera.

The male Cayugas have more green coloring on their heads than females do. Also you know a duck is a male because they will get a few feathers that flip back towards their head near their tail.

Females are also more vocal. That is how I knew my Lucky Duck was a girl. Now my female Cayuga isn’t as vocal as Lucky, but very much has the features of a girl.

Female Cayugas have darker beaks and are mostly black with very little variation in coloring. Also the biggest giveaway is no flip feather on their tail.

Dark Swan is more standoffish when it comes to people. But if you have food or treats then watch out. She pushes most of the chickens out of the way to get to them. She is more calm and doesn’t freak out when you walk near her, which some males have a tendency of doing.

Female Cayuga~ no flip tail feather and the coloring is more on the feathers and less on the head.

For a year, I told my hubby that I wanted Pekins. They were the best ducks for my homestead. But one day, I was reading a duck magazine and when I read about Cayugas and the amazing thing they do, I had to have them. 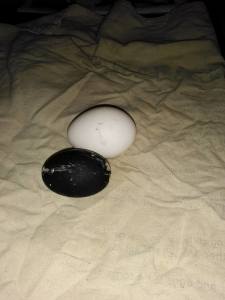 That is the best first egg I have ever gotten. Only the first egg comes out black then they start getting lighter in color. My one Cayuga female has been laying for a few weeks now and has laid more eggs than some of my chickens. Ducks will out lay them and keep laying during the winter.

Another exciting moment was when I found the egg in the nesting boxes! Most of the time ducks will just lay an egg where ever they want and you have to hunt it down. Not with my girl! She has laid every egg either in the nesting box, coop or run. It makes my life so much easier! Hopefully she can train any other girl ducks we get to do the same.

Duck eggs are best used for baking. It gives it a much richer taste. Some people will use duck eggs just like a chicken egg. But then others say it has more of a game taste or is much saltier, depending on your breed. I personally have only use them for baking.

And of course this……

My Hubby is going to kill me.