I have learned a few tricks while growing my large family. For one they don’t slow down on eating as they get older; they actually speed up. To make groceries stretch and last I have come up with some Mama Jedi Mind tricks.

For one is my bacon, I cut it in half. Therefore when they take 3-4 they actually only getting 1 1/2-2 slices of bacon. If I left them whole they would still eat 3-4 and 1 package of bacon would only last me 1 meal instead of a week or so.

Another one I just tried this week was cutting the bread in half for French Toast. My family loves the French toast made with the Pepperidge Farm Cinnamon Bread. If I leave the slices whole they went through almost 2 loaves of bread. I cut them in half and we only used 1 loaf. 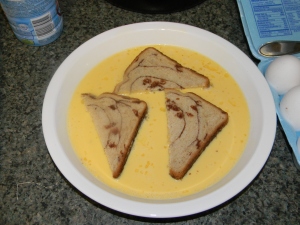 When it comes to milk we go through a lot. So I have a couple of tricks on that. 1) Why use the good stuff for cooking? I substitute for half & half (especially if it is close to expiration date), cream or powdered milk. I usually make up a 2 quart container of powdered milk and use it for cooking. 2) On those days when I don’t wanna go to the store I will mix in my cooking milk with the half gallon of regular milk that is left in the milk container. Shake it up and your good. You have to be stealth. My hubby would never drink it if he knew. So that is why I mix it with a 1/2 gone gallon of milk and it taste perfect.

Meat is our biggest expense. So to cut down on that I have one meatless day a week. And I sneak in refried beans with hamburger whenever I can. Tacos, chili, spaghetti sauce are just a few dishes I use it in. It’s also a great way to get some fiber into your family.

VOILA! Not only is this a great way make the groceries last but also cuts the amount of calories. In their mind they are still getting the same amount but in reality not so much.