As my husband puts it, I put the cart before the horse. I bought the chickens and then looked for a coop only to realize that all of the reviews were awful. I wanted something nice that would hold up more than 6 months. And then when I bought 6 more chicks, well it sealed our fate. We were building a coop.

Before I even got home with our new babies, my hubby had already found and print out of one he liked and was making a material list. Luckily, he was between jobs and had the time or else I am not sure what we would have done. After that we were off to Lowes for one of our 2-3 hour shopping trips.  That place is the equivalent of a mall to my hubby.

By the time we got home, we only had enough time to get the outline laid out.

Day 2: The girls and I dug out all of the grass and leveled the dirt while Hubby was working. When he got home, we laid some hardware netting and rocks under the timbers for support where the ground was uneven.

Day 3: I didn’t get any pictures because I had a lunch date with some family from out of town and then we had a severe storm come through. But the kids basically painted all the roof support beams and hubby started cutting and assembling. All of this was done in the his workshop since we knew we had bad weather coming.

Day 4: After a very early morning run to Lowes for more material,  we finished painting all of the structure pieces and started assembling in the yard. 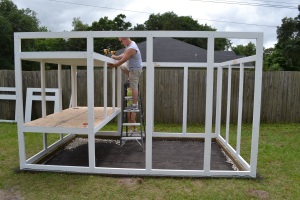 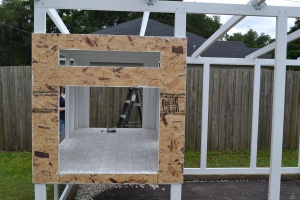 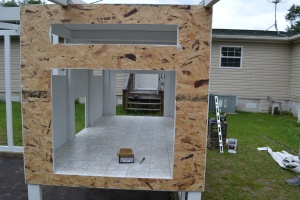 Day 4 was Easter so I was busy in the kitchen and didn’t get pics. But all we got done was painting the coop.

Day 5: we were making doors and painting them and adding the trim around everything.

Day 6: We added the hardware cloth around the outside except where we are putting the entrance door. 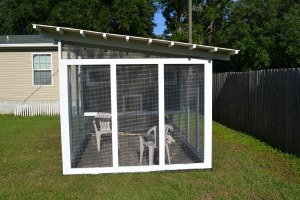 We had to take a break because Hubby had an important job he needed to work on. But after a couple weeks off, we were back at it to finish it up. Which is good because my chicks weren’t so little anymore and were trying to fly the coop. (Haha)

Finally, we were able to get some gravel to put on the bottom. It was more like dirt and some rocks but it works.

Then we put in a top layer of sand to complete the run area.

We also  finished up the ramp and added our roosting poles to the inside. 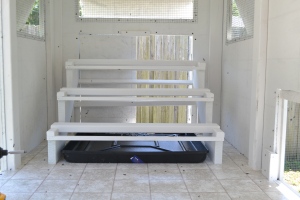 Success! The chicks loved their new home. Of course right now, I only put them out in the daytime and then bring them in the house at night. I am still protective of my little babies.

6 thoughts on “Building our coop deville”